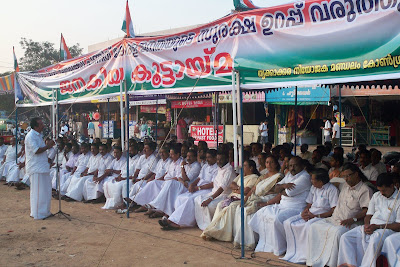 Here is the ruling political party which has failed to keep many of its election promises holding a road side meeting to tell the public that the Mullaperiar dam is going to burst destroying large  areas of property and killing thousands of people. They instigated many agitations all over the state through their party workers creating a fear psychosis among the public at large. Finally, the supreme court had to intervene and appoint an expert committee to study the safety of the dam. The committee after a detailed study reported that the dam is very safe and it will not burst under any circumstances. Slowly the agitations died down. In democracy most often political parties divert peoples attention by diverting their attention to irrelevant things and create panic so that they can cover up the failures. 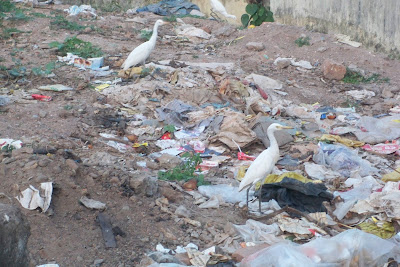 People are throwing their house hold waste on the road side because the municipality is not providing facilities for collection from houses and making arrangements to dispose them. These birds which are normally seen on the waterfront find it easier to find their food here without much effort. Neither the public nor the municipality is held responsible for the proper disposal of waster. The court has ordered that any one found disposing their waste will be punished by a fine and imprisonment. But who bothers in democracy. At the time of municipal elections those contesting elections come to each house and promise that they will do many good things but once they are elected they become municipal members and chairman and the people who voted for them will become public. In democracy elected members are not accountable for not keeping their election promises. 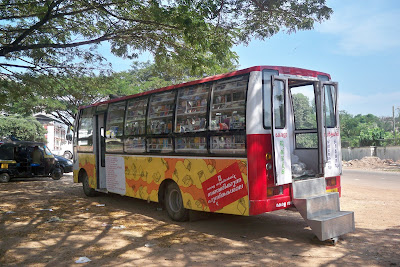 This is a mobile book stall operated by a government department to increase the sales of books and reading habits of people. Many such buses are operating in Kerala. The only problem is that no one visits this book stall and buys books. This is a pet project of a minister who has ventured to spend huge amount of tax payers money. Neither he nor the department is responsible for wasting public money. Democracy allows minters and government departments to spend large amount of tax payers money in useless projects and they are not at all responsible.
Posted by Joseph Pulikotil at 9:43 AM