STEPHEN HAWKING AND HIS PREPOSTEROUS THEORIES ABOUT GOD AND HEAVEN 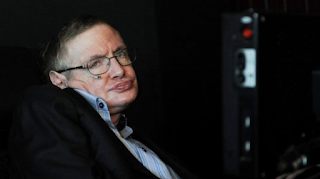 The belief that heaven or an afterlife awaits us is a “fairy story” for people afraid of death, Stephen Hawking has said. In a dismissal that underlines his firm rejection of religious comforts, Britain’s most eminent scientist said there was nothing beyond the moment when the brain flickers for the final time. Hawking, who was diagnosed with motor neurone disease at the age of 21, shared his thoughts on death, human purpose and our chance existence in an exclusive interview with The Guardian. He said this about a week back.

I am not vilifying Hawking. He is one the few people who is looking for a short cut to fame and fortune. After all what he is propounding is only a theory and not a fact. Heaven is for the soul and not for the physical body. A man with a physical body with a limited brain cannot see heaven. God's ways are inscrutable. When man thinks he has reached one boundary another boundary appears. There is no limit to knowledge. There is a famous saying in Tamil language --- What we know is only a handful and what we don't know is as much as the universe. If Hawking thinks he knows everything there is to know and the collective wisdom of mankind from early stages of life is false, then his theories are preposterous He is misleading youngsters who have no proper grounding in religious faith and turning them away from God.

Hawking is an Atheist. It is not easy to convince an Atheist. He doesn't know that we have a physical body that is corruptible and a soul which is incorruptible. It is the soul which goes to heaven or hell depending upon what we do here.

Stephen wants to see heaven with his physical body which is not possible. He must die to see heaven or hell. I am sure he will go to hell because as I said he has sold his soul for the sake of earthly fame to satan who is just waiting in the corner to carry his soul to hell. He will also be doubly punished for misusing his position as an eminent scientist and misleading people by his preposterous views. We should pray for this man.

Any one who wants to understand Stephen Hawking should first read and understand Christopher Marlowe's book Dr. Faustus first published in 1604.

Stephen has sold his soul to the devil for fame.

A word of caution. I know some of my friends will have strong views about my post. You are welcome to write what you want but please note your comment will not appear if you insult me personally.

Posted by Joseph Pulikotil at 6:15 AM